The customer’s API is protected by their custom OAuth2 authorization server (client_credentials flow is supported). Initially I thought - we did numerous integrations like this, both with REST APIs and various databases to which we connect via the gateway, so it’s going to be quite simple. Yeah, well.. Turns out, we never did a combination of HTTP requests via the gateway.

So I started with trying out the HTTP action but after doing some research, it turns out it isn’t supported in scenarios with the gateway. So my next thought was - we are building lots of custom connectors which actually support the gateway. I went ahead and created a custom connector and manually built a Swagger definition around the REST endpoints. The issue came after I tried to setup authentication. Turns out, that when you use the gateway, you are stuck with Windows and Basic authentication only.

Alrighty, we are engineers, let’s come up with something creative - let’s just define the Authorization header and give in a value with each request (that is the best way anyways, since client_credentials flow isn’t supported by custom connectors as of now - only some first party connectors can use it). Well, turns out you can’t do that:

So while getting quite desperate with this entire situation, I started thinking about alternatives - like using Azure Relay to expose the endpoints - but I wanted to avoid this, because it would introduce another complexity with customer’s security department (this one is kinda large corp) and we already had the gateway setup and approved. 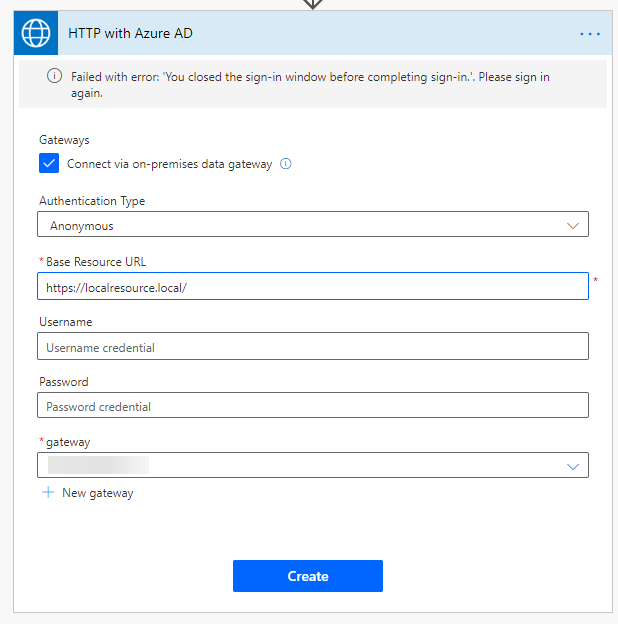 I then tried to call their on-premises authorization server to obtain the token for the API via client_credentials flow… And there it was, I got the token! Cool!

Next up, was the need to make the actual call to customer’s API. So I parsed the JSON response from the token endpoint, added the token into the Authorization: Bearer <token> header and made the call which went through the gateway and retrieved the data!

So a story with a good ending. I was honestly surprised that a connector called HTTP with Azure AD (I already used the connector in past to call Azure AD protected APIs in the cloud) would let me call on-premises REST API via the on-premises data gateway. Obviously, if you don’t require the use of Authorization header in your on-premises API requests, you are best off with making the custom connector instead.

Hi there, could you please post some repro steps so I can try? Eventually, feel free to reach out via e-mail - jan.hajek@thenetw.org - will try to do my best to help you out.

Choosing On Prem now has “Azure AD resource URI” as a mandatory field - so I think this workaround might be outdated now.

You mentioned 3 steps 1) Configure connector with anonymous authentication 2) get a token via client credentials 3) call the actual api’s with authorization header.

Thanks for the information. I would like to use this to connect to on-premises interfaces (REST, OData) as backend of a virtual entity.

Is this possible? I can’t find any information about using the On-Premises Data Gateway in combination with virtual entities.

I agree with @Caleb response. Choosing On Prem now has “Azure AD resource URI” as a mandatory field and if we don’t give valid value it automatically turns connection to Connect directly (cloud-services).

Awesome!! i have been searching for a solution for a very long time. Earlier I had created a custom connector for the On Prem API and made it to work with token by passing it in the URL query part. But the security team tagged it as a security risk

This solution worked perfectly. Thanks!!

Thanks man I was looking into it for a while